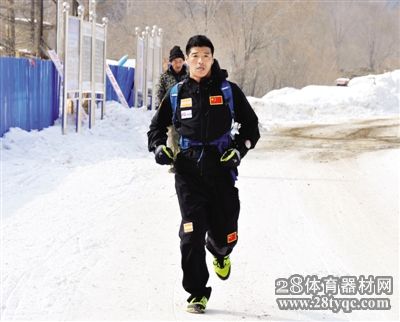 Chen Penbin began his departure on the evening of November 20, Beijing time. In an interview with Tencent Sports, Li Sheng said that before the game, only expecting Chen Pengbin to finish the game, he did not even think about the rankings. Because of the unpredictable weather in the Antarctic, he was worried that the game could not be held as scheduled.

Chen Penbin started from Beijing in the early morning of November 12, Beijing time, and stayed in Chile for three days. Since the weather in Chile did not meet the takeoff conditions, he delayed the day by more than one day before he flew to the Antarctic Circle on November 18 local time. According to reports, six players from six countries participated in the competition, including five male players and one female player. Chen Penbin was the first Chinese player to participate in the tournament.

The weather on the day of the match was not very good, and the wind was very heavy. The organizing committee temporarily changed the plan to hold the 100-kilometer limit run ahead of schedule, followed by a marathon run. According to the organizing committee's message on social media, Chen Penbin has been leading the second place for an hour after completing 90 kilometers. In the end he finished the game with 13 hours 57 minutes and 46 seconds and crossed the finish line for the first time.

Then he wrote on Weibo: "This year's climatic conditions are very bad. Other runners are running and the game is expected to end late at night. Good luck to all of you! I'm waiting to meet you and celebrate!"

After receiving the satellite phone call, Li Sheng was very excited. The hand holding the plate trembled and the symptoms eased in two hours. He said that this is a declaration issued by China. For many years, Chen Penbin has been regarded as a Japanese because no one Chinese has ever participated in such a competition before Chen Penbin. "What he was doing was very undisciplined and not very Chinese, so he bought a national flag on his equipment. From then on, people know that there is a runner from China and China also has players. Can participate in such a race." Li Sheng said.

After finishing the Antarctic, Chen Penbin became the first runner in the world to finish the seven continents extreme game. How much money will Chen Penbin get for winning the championship under such harsh conditions in Antarctica? Wen Sheng, Li Sheng laughed: "Bonuses? There is no word, if you say that you are running for the bonuses to participate in the limit we all look down on you. Extreme running is a spirit, the runners to participate in this game is not only a bonus, On the contrary, it is necessary to pay a high registration fee, which is totally different from other professional events we have come into contact with. Extreme running is a spiritual pursuit, a reflection of realm."

There are many different portable charcoal BBQ for you to choose from, and some have unique features that satisfy specific grilling needs. Such as Notebook Grill, Tabletop Charcoal Grill, Collapsible Grill, Bucket BBQ Grill, 14" Kettle Grill and so on.

We also carry a great selection of BBQ grill accessories and grill parts, everything you need to be the BBQ king, just feel free to find us to be your business partner! We provide international sales service, vendor management service and sourcing service, we could help you out for anything related to BBQ Grills you need to source.